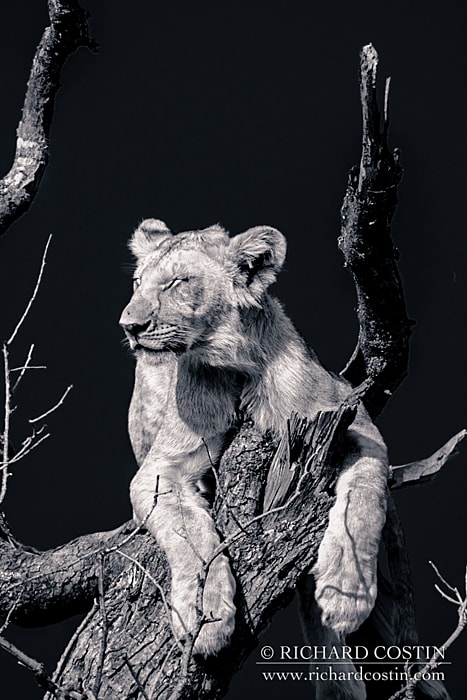 Hi all and welcome back to the blog! We are continuing where we left off in my last post. Our time in the Marsh area was nearly up and whilst the rains had let up for a moment, we could see another large storm heading in our direction.

Patrick and I scouted the plains and we noted a couple of Lions approaching a large fallen tree. They seemed determined and we quickly made our way in their direction, not knowing what they had in mind. As we approached I began briefing the group on my thoughts regarding what settings would and wouldn’t work (and just as importantly, but often forgotten, why they do and don’t work) with the dark lighting and storm behind. Then the clouds suddenly parted and the late sun beamed down to the exact spot where our Lions were sat. This is one of those never happens moments and I often look on these are rewards for the dozens and dozens and dozens of times the lighting and animals seem to have a different schedule.

The scene was glorious and I couldn’t have lit it better if I had an army of assistants with giant soft boxes and a few hours to prepare. Just magical. As always there is minimal processing to my raws, these are the tones we saw. It was stunning… Slight underexposure and playing with different compositions was the key here. I always instruct my groups on what I would do and then allow them to run with it as their own style emerges. The light was literally changing every minute and some moments lend themselves to B&W and others are screaming to show off the colour contrasts. Simply beautiful. This was a super rare treat and whilst I normally advocate easing up on the machine gun shutters, this occasion was simply too intoxicating, we took A LOT of shots. Just to add more drama to the background, a brief dust devil swirled around behind. Clearly we weren’t the only ones enjoying the view. As the temperature quickly dropped, he made his way down to a lower log close to the ground with a little more shelter. Now the lighting was flattening out and we really had made the most of that angle I recommended we moved around for this composition. Moving our car when we have a good spot is always a gamble but one I am usually willing to take as myself and Patrick are very used to working in this way together and is the only way to yield something different from others working nearby. His pal close by had the same idea and descended as the rain started.

And then wow! I have never seen such rain in the Mara.

We were already in a sodden marsh area and when the storm we were photographing in the distance not 10 minutes earlier arrived it was intense. Patrick (a guide of many, many years experience) said that it was the worst he had ever driven in. Not that you would know, he handled the Land Cruiser perfectly and we made it back without getting stranded which is very easy to do if you are inexperienced. Little choice here other than to aquaplane our way back!

You never know when the photography is over and even seconds from camp I have had great sightings in the past so we never stop looking until we are back in our tents. In this case we came across this small herd of Wildebeest that were in a great mood thanks to the glorious rains. For all the herbivores the rain is a welcome arrival as it means for a prosperous few days ahead. As finally as we neared camp we swung by our spot where we predicted the local Lion pride would be hanging out. Normally asleep and at best just waking up, these guys were cooled off and happily playing in the wet.. Great to see them playing so much and as the light faded to nothing and the ISO’s reached comical levels we made our way into our camp to warm up in the showers and toast to a fantastic ending to the day over dinner.

We are almost at the end of our delayed Migration 2014 report, just a couple more entries! Then we are strait into our fantastic adventure this February. Stay tuned here on the blog, over at Facebook and on twitter. I am also preparing a wonderful black and white print series for purchase that will be exquisitely created in large format so keep your eyes peeled for that too, the test samples I have had look amazing!

Thanks as always all, Rich.