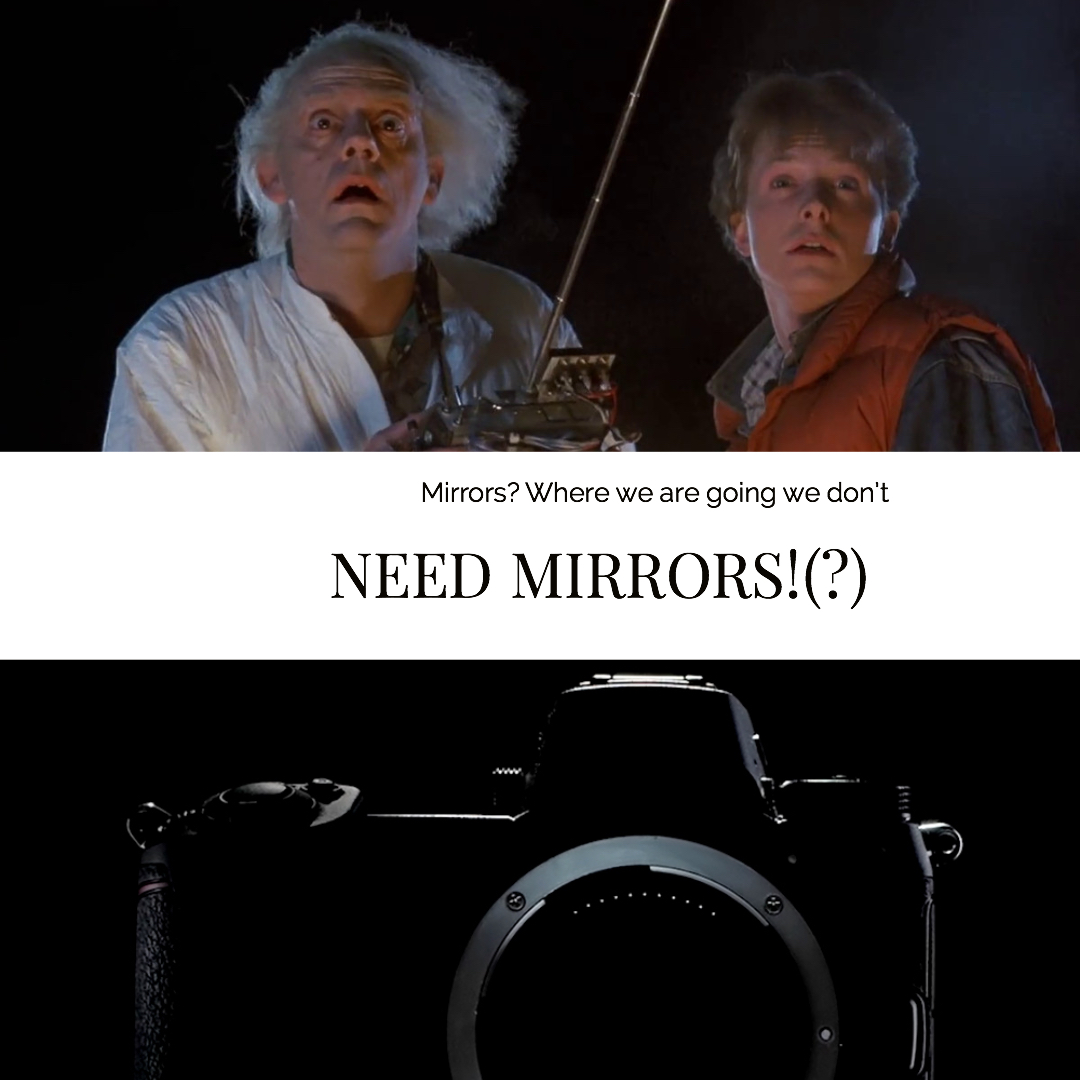 Time to put on your fancy pants. This wildlife photographer is taking an initial look at the new Z7 mirrorless camera from Nikon.

The new cameras announced by Nikon today, the Z7 and Z6 are Nikon’s first full frame mirrorless cameras. With a larger mount and much smaller body these should offer up some interesting options for travelling photographers.

Mirrorless means basically just that, no flapping mirror and less moving parts. This comes with pros and cons and as technology marches relentlessly on the cons are diminishing, to the point where Nikon has now put their considerable talents to task.

I could blither on about the specs but there are many other sites that will cover this in depth and I will reserve my main thought for what I do best, that hands on report. Shouldn’t be too long before my spies over at Nikon can sneak me one out and be very assured I will be taking a critical look at what the camera offers wildlife photographers such as myself and its performance. The smaller size should definitely help my back when leaning out of cars near Lions.

Exciting stuff no!?! Look forward to a complete hands on first impressions and review soon but for now check out the info on the official Nikon site as well as the sad but inevitable negging in the forums.

See you soon, with or without a mirror!

I was lucky enough to have a good play around with the Z7 camera yesterday and quiz Neil and Ricci from Nikon UK. I’ll simply summaries my initial thought here. Also note these were pre-production cameras

To sum up, so far I was very impressed with these cameras. I am not sure they would replace my DSLR gear for a wildlife trip but I do think that if I was shooting any of the following genres regularly I would dive right in no questions: landscapes, travel, street, portraits (with adapter for now until new lenses arrive), journalism.

I say this as the camera offers top of the range full frame image quality (ala the D850), super focusing and all the above in a much smaller, lighter, discrete package. The stutter when burst shooting gives me pause for thought for fast wildlife and sports but it certainly was no worse really than the mirror flap we have to deal with perhaps. Focus tracking needs proper use to gauge vs the DSLRs.

More tests (I sense a Stellar’s Eagle landing sequence in my future) soon. If you fancy a smaller high end mirrorless camera you will no be disappointed though, get your preorder in. Exciting times!

Having been featured on a few camera news sites regarding this post I would just like to clarify that despite what a few people seem to intimating I am not paid/endorsed/sponsored by Nikon. I do have a friendly relationship with their support team but it is entirely just that, friendship. I don’t get given free cameras, much to my dismay! I do get the occasional lens cloth though 😳

Please do remember as well, it’s just a camera folks!

Well I have had a second, more lengthy and considered hands on today courtesy of Grays of Westminster in London and I have have some additional thoughts…

I must say I was disappointed to the attitude of some others viewing the cameras at the same event. Quite a few people were rather indigently trashing on the camera as they tried it to the Nikon guy when they were clearly non paying attention to what they were doing. I guess this is fallout from the weird online hysteria surrounding the Z launch. For example…

NIKON: “You have it in AF-S focus mode”

To counter some of the attention grabbing misinformation from the net pundits (note, not photographers) Ricci from the Nikon School in London has been posting some brief videos. Check them out here.

Again here is my roundup for genres….

What about me and the wildlife?
Well, if you also have a fast camera for action on longer lenses (in my case the near perfect D500 is my choice) and you want a second camera for best resolution/quality with wider lens and/or for slower subjects then it works very well. I don’t think this would be your primary and only wildlife camera on say a safari due to the tracking limitations at high speeds. If you are on a nature trip with long lenses and you only take one camera (living life on the edge are we!?) then the D850 is still the one stop choice.

I actually expect this will replace my D810 as the companion to the D500 out on safari. Why? Best sensor, smaller size (big plus when travelling) and the D500 takes care of the long lens fast stuff. This is how I expect my thought process to be on my next Masai Mara trip…

Cheetahs running across the plains / birds in the air? D500

Elephants approaching with a sunset behind? Z7

Landscape as the sun is setting? Z7

I always have at least two cameras on safari so the Z7 will slot in very well I imagine. It will also have the advantage of being taken out by myself far more often on causal occasions where I really wouldn’t want to lug a full DSLR and big lens which is a welcome bonus and actually adds a lot of value to the camera for someone such as myself who buys all my gear out of my own pocket.

Whatever your photography style/preference/budget you can’t say Nikon aren’t giving us fantastic options at all levels. Stay calm and carry on all, there is something for everyone.

Now, how do I post a youtube video with the thumbnail of my hands on my head to get some more hits? Need to set up some affiliate adverts first perhaps…. Ahem.

Having read through a large pile of email regarding mostly the autofocus and single card slot. I highly recommend anyone concerned reads Thom Hogans excellent summary of the state of play.

My view mirrors (hah!) his. Back when the D3 first came out it introduced two CF slots for us photographers and I was thrilled. All the thoughts of redundancy and the like came to mind and for a while I used the mirror option on the two slots doubling up my card costs (a bigger concern back then). A few cameras later and reevaluating my workflow I am almost always in overflow mode. Cards are reliable, assuming you are sticking with the genuine branded ones (sandisk and lexar are my staples) and by far not the weakest link in the camera system.

With these two new cameras, all else being equal (bear that statement in mind) sure, I would take two slots any day. Why wouldn’t I?! However, not at the expense of size, as size is the key factor for me wanting this camera. Let alone any technical restrictions that would impose in the small body. The D5 is a huge beast and presumably has plenty of room to have two controllers running at full speed no problem.

Given the choice (and we can only presume it was a technical choice on Nikon’s part) I choose the smaller compact body vs the extra slot. I would also rather only have 1 XQD than 2 SD. XQD (and soon CFexpress) cards are solid and reliable both physically and in the make up of their digital interface. As well, especially in a smaller camera I doubt we could get two independent controllers to write to the cards completely separately. Genuinely not a deal breaker for me and I shoot some pretty unrepeatable moments out in the field. If you had asked me 10 years ago, maybe I would be fretting but I am not now. The advantages this camera can offer in certain situations would diminish if the size was bigger, price was much higher and power consumption much greater; if those weren’t issues (and they would be) then give me two slots. But they are and the compromise to drop a slot was, for me, the preferred compromise.

With regards to the focus, as mentioned in my previous update the focus is spot on and super quick to track when simply engaging the AF and drops a little when the shutter is actually fired. This could be an issue if I weren’t backing the camera up on Safari with the D500 &/or D5 but this camera is for the more considered moments I encounter as well as trekking and light travel. For all but the fastest of action this camera should deliver the best, sharpest, richest images of the Nikon lineup. All that in a tiny, super portable package is just a real treat. Mine is arriving in the first wave so expect a full and honest review early October.

See you next time.